Abruzzo is a land of icy winds and rocky mountains, far removed from the buttery sunlight of Rome. This savage terrain might not be the place to live out your mediterranean fantasies, but it’s ideal if you’re looking for the lesser-known Italy – particularly close enough for a day trip from Rome. Prices for food and accommodation are generally low, but there is also – generally speaking – little desire to cater to travelers. Abruzzo’s main attraction is its nature – hiking when the weather is warm, and skiing when snows soften rocky passes. However, there are also medieval castles, Roman ruins, small villages, and abandoned towns to be explored.

In spring 2012, I was nearing the completion of my bachelor degree, with plans to move to London for grad school after a summer working at home in the states. I spent (what I thought were) my last months in Rome throwing back espressos to cope with school-related stress, anxiety about the future, and a desire to do nothing but drink Peroni in a sunny piazza. It was also around this time that I met the man (Flavio) who (spoiler alert) would later become my husband.

When I moved to Rome at 19, the city’s intrigue made up for the stress of dodging swarms of people and speeding cars. At 22, the chaos had become suffocating. On the bus every day I would fight for a hard plastic seat, a refuge from the sweating, elbowing crowds standing in the aisle. Even my small bedroom in a shared apartment provided little sanctuary, with my insane neighbor screaming profanities at me through the wall (and chucking onions at me from his balcony).

One weekend Flavio and I decided to head to the mountainous region of Abruzzo for a breath of smog-free air. He was excited to show me the land of his ancestors (family legend says some were part of brigand gangs which roamed the region), and I was thrilled for a chance to escape the bedlam of Rome. Late one Friday afternoon, we loaded up the car with snacks and booze and headed out of the city, weaving across serpentine roads between high peaks rolling with mist.

On-route from Rome to our hotel on Lago di Scanno, we made our way towards the village of Castrovalva, strewn across the mountaintops high above the SS479. In the absence of designated parking, we left the car somewhere in the city centre, and began climbing through the spiraling alleyways as the milky fog swallowed the vehicle behind us. Each building seemed to be sculpted from clouds which had collided with the mountain.

The city of Frattura similarly evoked the foggy desolation of Silent Hill, and seemed to be inhabited only by imposing Maremma sheepdogs policing long parades of goats. Years later, we discovered that many of these cities inspired the work of geometrical artist M.C. Escher.

By Sunday, the fog had dissipated to reveal a ponderous grey sky. When the threat of rain subsided, we braved the dirt track to the abandoned village of Gioa Vecchia perched on the side of a mountain. The city’s newer half is connected to civilization by the road, while the other is isolated by a collapsed cliff and a deep chasm. Legend says that the city’s inhabitants moved after repeatedly sighting a vengeful minotaur (though it’s more likely that a landslide drove them away).

In the newer half of town, amateur graffiti and brightly colored airsoft pellets shattered the illusion of complete abandon, but didn’t deflate the electric tension that lends an intoxicating sense of adventure to abandoned places. We poked into all of the houses, examining broken furniture, torn mattresses, and a hat still hanging patiently on its hook. Sunlight poured through collapsed roofs onto piles of ochre roof tiles. One room held a mountain of dusty bottles of antique alcohol. We analyzed the bottles, charred wood and scorch marks, objects from past lives becoming riddles.

We made our way up the hill toward the older city, picking our way through half-dead weeds and over large rocks. The only sound was of our breathing and our boots crunching on rotting chunks of wood. Near the crevasse we stopped, acknowledging defeat in our hunt for the legendary minotaur. As we sat, the silence grew larger, even as the wind brought the distant sounds of civilization from the streets in the valley below.

View of the town of Scanno 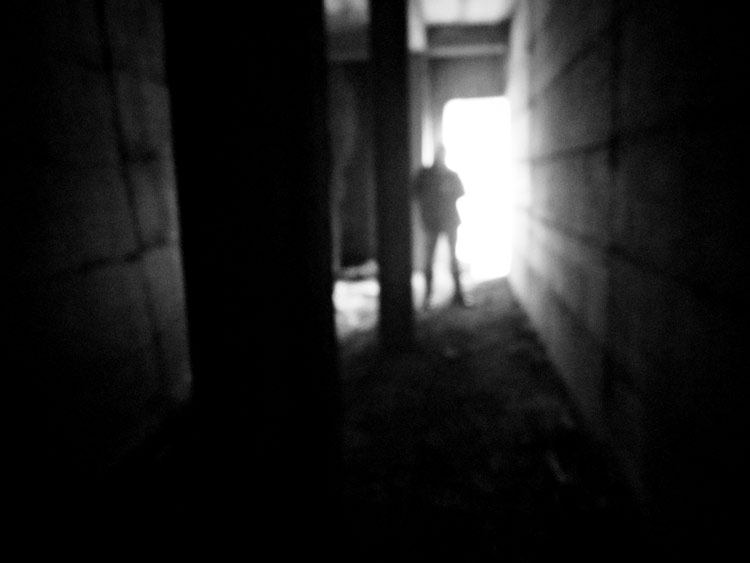 One thought on “Adventure in Abruzzo’s Misty Mountains”